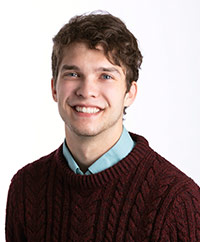 Noah Weinflash is an analyst for the Litigation Support practice at Applied Marketing Science (AMS). In his role, Noah has worked on projects in many fields of litigation market research, such as false advertising and likelihood of confusion, and is involved with all aspects of litigation projects, including exploratory research, survey design, data collection, data analysis, and report development. He’s particularly interested in the diverse methods of data analysis AMS uses to produce their results.

Before starting at AMS, Noah went to Tufts University, majoring in Cognitive & Brain Sciences and Quantitative Economics. At Tufts, Noah spoke to as many people as he could, be it through volunteering as a tour guide, competing in parliamentary debate competitions, or performing with his improv group, Cheap Sox. His last semester he served as a teaching assistant to Intro to Cognitive and Brain Sciences, leading lectures on consciousness and decision-making. His senior thesis looked at political betting sites and how accurately traders were able to predict political outcomes in the aggregate. Spoiler: gamblers are not much better than the polls.

Originally from New Jersey, Noah developed a crush on Somerville throughout his time at Tufts and still can frequently be found eating at JP Licks or meandering around Davis Square. His allegiance to the Yankees will never fade, no matter how many Red Sox World Series parades his friends/God subject him to. He’s a big fan of neuroscience and the brain, as well as wonk-ish politicians, shows produced by Michael Schur, songs Spotify tells him to listen to, and the fact that AMS keeps a bowl of Atomic Fireballs in the office at all times.