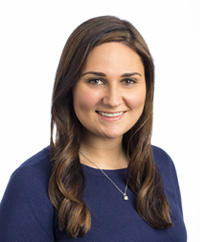 Rachael Settipani is a senior manager in both the Insights for Innovation and Litigation Support practice areas of Applied Marketing Science (AMS).

In her role at AMS, Rachael is involved with all aspects of the research projects, including exploratory research, survey design, survey fielding, quantitative and qualitative data analysis, conjoint analysis, and report development. Rachael works with a variety of clients in industries such as medical devices, telecom, heavy equipment, industrial components, engineered products and technology. For Applied Marketing Science’s litigation practice, Rachael specializes in the areas of patent and trademark infringement, class certification, market confusion and deceptive advertising.

Prior to joining AMS, Rachael interned at MarketCast LLC, a market research firm specializing in the entertainment industry, where she analyzed interview and focus group data and assisted in the overall research process. Additionally, she was a marketing intern at Textron Systems Corporation where she was responsible for researching numerous trade shows, creating planning presentations, and conducting post-show surveys. Rachael has also held internships at New Harbor Group, a public relations firm in Providence, RI, and at the Law Offices of Barrett & Sullivan, in Lexington MA.

During her undergraduate studies at Providence College, Rachael led a team of students in a research engagement to support the American Diabetes Association. She supervised the team as they conducted in depth interviews, executed surveys, and performed ethnographic research, which they compiled into a final report and presented to the ADA.

Born and raised in Burlington, MA, Rachael enjoys spending time with friends and family. Rachael loves the ocean, and in the summer can frequently be found on her family’s boat in the north shore or vacationing on the beaches of Cape Cod. A country music fan, Rachael likes to attend as many concerts as she can. In her spare time, Rachael likes to practice yoga, attend Boston sporting events, and enjoy the outdoors.